Texas Live! Will Be More Than Live

Forget about Dallas and Fort Worth, Arlington is soon going to be the place to be in the evolving DFW community.  Already home to the Dallas Cowboys, the most valuable franchise in American sports, as well as the Texas Rangers, Arlington attracts many visitors throughout the year.  With a few major projects going on by these stadiums, Arlington is going to be the place where you want to be in the growing Dallas-Fort Worth metroplex.

Fans of the Texas Rangers, plan on keep coming to Arlington to see them swing their bats.  After a vote earlier this year, the Texas Rangers will be staying in Arlington until 2053.  A new stadium is about to start being built right by the current one and will be top of the line.  It will not come cheap, as the estimated cost of this stadium is right around 1 billion dollars.  It is also estimated that the new stadium will have an annual impact on the revenue of both the city of Arlington and Tarrant County; 77 million and 137.6 million respectively.  That will equal 2.53 billion between now and 2054 for the city of Arlington.  Of course a new stadium means construction, and this high end ballpark will create an increase in up to 3,000 construction positions as well as 2,950 annual other jobs.  This is a win-win situation as the Rangers get a new stadium that they have desired, while Arlington will see a major increase in economic activity around the stadium.

The new Rangers ballpark is not the only construction going on down in the entertainment district.  Texas Live! is a project that will attract thousands of people every day.  Located conveniently between AT&T Stadium and Rangers Ballpark, it will consist of over 200,000 square feet of restaurants, retail shops and will also include a hotel and convention center.  The hotel will be a high rise with over 300 rooms and have 35,000 square feet of meeting space.  Texas Live! is not done yet.  Arlington Backyard is the last part of the massive development.  This will be a small concert pavilion that will seat around five thousand people.  What a great place to go to for an outdoor concert on a nice night. This will create more jobs for the city of Arlington as well as is estimated to bring three million more visitors to the city each year. 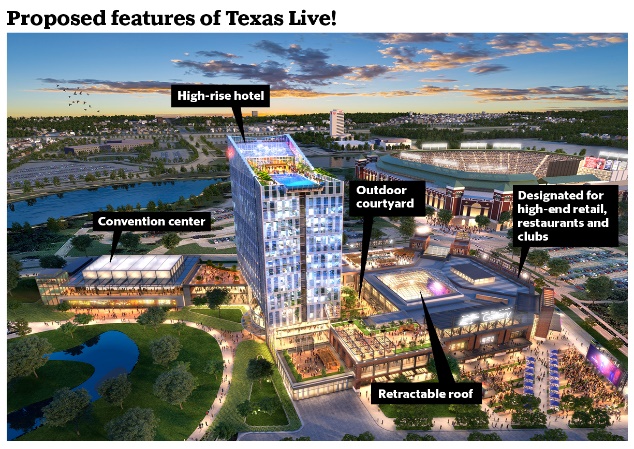 We are still not done yet with the new Arlington entertainment district.  The last development is of Champions Park.  Champions Park will be fourteen acres of more restaurants and retail shopping.  There will be four buildings with a 70-30 split of restaurants to stores.  If you needed to find another place to go out to eat or shop, than here you go.

Exit 28 off I-30 will soon be where everyone from the DFW area will be heading.  From sports games, to shopping and dining, to conventions and even concerts, this will be the place to visit.  Arlington’s entertainment district will boom, and it will only help out the local economies by providing more jobs as well as an increase in activity in the area.  Be patient, but Texas Live! will be opening soon.  Push over Dallas and Fort Worth, Arlington is the new place to be now!

Andrew Kulig is a 2017 intern at SVN | Dunn Commercial.  He is a  senior at Texas Christian University where he majors in Finance & Real Estate.  Andrew is originally from Boston, Massachusetts, where his family still resides today.  He attended the prestigious Governor’s Academy, which is the oldest boarding school in the nation. He is focusing on the office sector of commercial real estate in the Arlington/Mid-cities area of Dallas-Fort Worth.  Outside of work Andrew enjoys his college life and everything it has to offer.